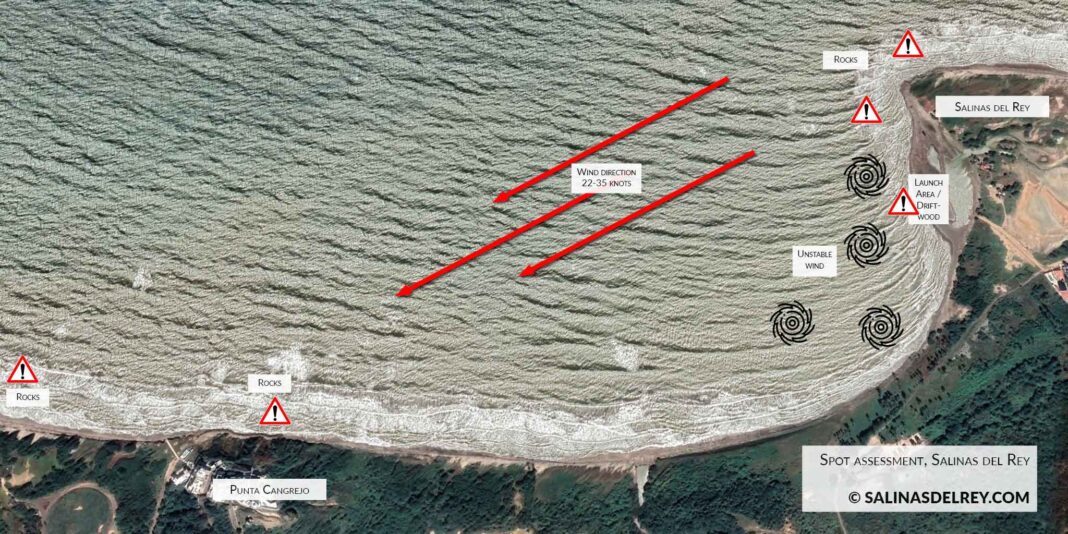 The dangers you should know when you kite in Salinas del Rey:

Salinas del Rey is first and formost a wave spot. It’s the wave that makes it what it is and if you are not here to enjoy the wave. You shold look at optional spots like Puerto Velero or Lomita de Arena. The wave in Salinas can get to over three meters when it’s good. If you drop your kite and this wave craches your precios toy, you might be looking for someone to patch your kite together after the wave blows a big hole in your kite and possibly snaps your lines. Many kiteschools located in the area prefer to bring their students to the beach in closeby Palmarito, the water is calmer and there’s hardly any other kiters around.

There are plenty of rocks around the point. You can see them at low tide. At higher tide or a day with plenty waves they are hidden. The most dangerous rock is however located out in the more calm water just next to the point, make sure you understand where it is located.

From the point where the spot is located the wind direction is practically offshore. Well you won’t get blow all the way to San Andres but you will end up far, far away possibly at a rocky point if you mess up here. The further out you go the further down the coast you’ll end up if you have a mishap.

The Magdalena river meets the ocean in Barranquila. It’s the biggest river in Latin America after the Amazon and it brings huge amounts of driftwood out at sea. The wind we come to enjoy in Salinas del Rey unfortunately takes this into the bay and up on all the beaches. On land getting dragged by a kite out of control has caused to broken bones as they meet the driftwood. At sea you might end up surfing over a floating tree or in the worst case crash on top of one. So look out! All this is very seasonal and relates to tides and more, so with some luck you won’t see much of this out in the bay.

Theres only a thin sandbank to lauch the kites from. And you’ll be stepping over large trunks and driftwood as you setup your kite trying to avoid other kites and lines that go in all directions. Many who launch here have no understanding of what’s a safe launch tecnique or the proper direction. Better setup fast and get out on the water.

There is a fairly strong current inside the bay. You can even feel it standing in the shallow parts of the bay. It will affect your upwind so stay further out if you’re struggeling to stay upwind in Salinas del Rey.

It’s common to see kitesurfers in trouble at the end of the day, caught out at sea with only a weak wind as the sun sets. Wind is very strong afternoon, end of the day it will drop of a bit before it gets more intense for maybe half an hour before it dies completely. It’s common to see overconfident kiters out at sea with kites in the water they can’t get up again as the wind gets weaker loosing their boards in the process. Worst case they need to be rescued by other kites as they drift twards the rocks at Punta Cangrejo with their kites in the water.

When the sun gets low, make sure you pay attention to the change in the wind. If you get into trouble, do a self-rescue so you end up in the bay of Salinas and don’t float further down into the rocks at Punta Cangrejo or the next beach that has a large concrete hazard in the water.

As the wind passes the point with is small sand dunes and structures it gets gusty. You’ll feel that inside the bay where there’s also “holes” where the wind drops completely. If your kite drops here, you have limited time before the kite is in the waves and on the beach.

Many schools teaching simultanoucly in a small spot with “offshore” wind = tangled kites ++ The water is too deep for those learning to kitesurf in Salinas del Rey so they often float out into the bay causing situations. There’s no rescue boat on location so the instructors are left standing ashore in moste cases. Stay further out in the bay and be quick as you go out or in of the launch area to avoid the mayhem.

Colombians kite the way they drive. Not much notice is paid to rules or other people in traffic. Meaning someone might very well come falling out of the sky after a big jump on top of you. And don’t expect the locals to obide to rule of way, they won’t. So keep your distance and look around before making a turn or doing your jumps. There is a poster in the restaurant with the IKO proper kite etiquette and way of rules.

As the wave is the main attraction of the spot in Salinas del Rey not surprisingly it attracts kitesurfers riding the waves on surfboards. Some of these unfortunatly have a tendency to run into other riders on twintips causing tangled lines and an unfortunate exchange of words. There is a rule in kitesurfing sayint that whoever is surfing a wave has priority. However many kiters in Salinas have never learned about way of right or rules so for the surfers to choose to follow this particular rule might be a bit odd. And in most cases they are not surfing the wave, just cruising along it powered by the kite. It’s usually too small to really surf.